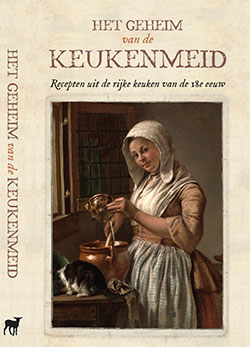 I prepared this beverage with barley water and almonds for the promotion on the Foodie Festival in Amsterdam of my most recent book Het geheim van de keukenmeid (The cook’s secret). Theme of this publication is recipes from the eighteenth century from printed cookery books with the word ‘keukenmeid’ (kitchen maid or cook) in the title. I also served some samples from the book, but I also wanted to serve something to drink. There are no recipes for beverages in The cook’s secret, but the drink on this page is from one of the eighteenth-century cookbooks that were used for the recipes. It’s from De volmaakte Hollandse keukenmeid (The perfect Dutch Cook) by Claus van Laar from 1746. It is part of the chapter with recipes for preserving fruit and restorative drinks. It rather resembles the opening recipe of the same part, which is called ‘oryade’ or orgeat. Both are based on barley water, but the first orgeat recipe also contains bitter almonds. The Friese keukenmeid (Frisian cook) from 1772 copied that recipe and added a version with wine.

The name orgeat hints at the fact that barley was once an essential part of this drink. Orgeat is derived from the French orge (from Latin hordeum) which means barley. The recipe on this page is for an orgeat that is still made with barley water. Nowadays barley water is again popular because of its many health benefits: barley is rich in fibres, vitamins B1, B3 and B6, magnesium, folic acid, manganese, phosphorus and zinc, and helps lowering cholesterol and regulate blood sugar. Barley water is even supposed to help with losing weight. But before you think barley is too healthy to be true: it is also an important ingredient in beer. By the way, Coca-Cola started out as a medicinal healthy drink, and look where that ended up. I only drink cola when my stomach gives me trouble and indeed, it really helps!

In humorism, the health theory based on Hippocratic medicine and using the four temperaments, barley is cold in quality. This would be beneficial when the patient suffers from fever. Whether the second quality of barley is dry or wet, depends on where you look for information: according to the Greek physician Anthimus (early sixth century), barley is cold and moist. But seventeenth-century Dutch physician Jan van Beverwyck describes barley as dry in his Schat der gesontheyt (Treasure of health) from 1651. Anthimus praises the qualities of barley soup, which is beneficent to healthy people as well as those with a fever. Van Beverwyck is less positive. Barley is of a lesser quality than wheat which is hot and moist according to humorism, and more nutritious than any other grain. There are two nineteenth-century barley soups on Coquinaria, from Aaltje and from Carême. I have also published a healthy Roman dish with barley. 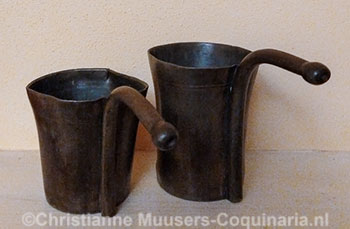 A cup for bedridden people

For the picture of the orgeat for sick people just above the recipe, I have used an eighteenth-century tin cup with a drinking spout that was used by bedridden patients. Here are two different-sized cups, and they still work!

This is the recipe from the Volmaakte Hollandsche keukenmeid (see bibliography), pp 86-87. The English translation can be found just below the original recipe. 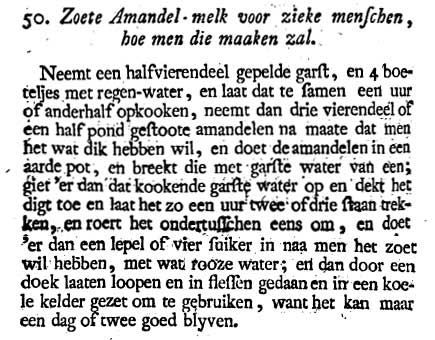 Sweet almond-milk for sick people, how to prepare it
Take a half quarter pound hulled barley, and 4 bottles of rainwater. Let this boil together for one to one and a half hour. Then take three quarters or a half pound ground (actually pounded) almonds according to the desired thickness. Put the almonds in an earthenware pot and dilute them with [some] barley water. Then add boiling barley water, cover it tightly and let this steep for two or three hours whilst stirring it once in a while. Then add about four spoons sugar, according to how sweet you want it, with some rose water. Then strain it through a cloth and put it in bottles in a cool cellar to use, because it will only keep for a day or two.

This orgeat for sick people is made with sweet almonds, but if you like, some drops of bitter almond essence can be added. In this essence, the poisonous cyanide that is present in bitter almonds has been removed, so you can enjoy the taste of bitter almonds without ill effects to your health.
Medicinal drink (but also very enjoyable), 2.5 liter / 5¼ pints or 13 cups; Preparation in advance 90 minutes; preparation 3 hours. 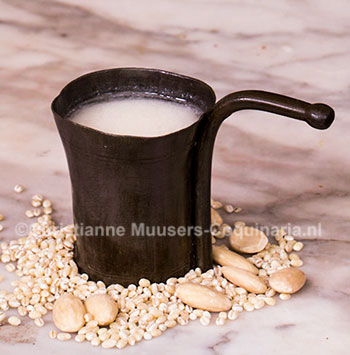 Rinse the pearl barley under cold running water until the water remains clear. Put it in a pan with the water, bring to a boil, close the pan and let it simmer for 90 minutes.

Stir in the ground almonds and take the pan off the heat. Close the pan once more, and let it stand for two to three hours without heating. Then strain the orgeat through a fine-meshed sieve or strainer. This amount will yield about 2.5 litres or 5¼ pints. Return the almond-barley-milk to the pan and reheat. Stir in sugar and rose water. Pour the orgeat into clean bottles, let it cool and keep it in the refrigerator for up to four days. To lift the taste, one could add a little citric acid, which will also help preserving the orgeat. When the bottles have been standing for a while, the liquid will separate in an opaque thicker liquid on the bottom with a clear layer on top. Industrially produced orgeat would therefore contain an emulsifier, but one can also simply shake the bottle before pouring.

Modern orgeat only contains almonds, and juice and zest of lemons. Preparing barley water beforehand can be omitted in that case. Another variation is using orange blossom water instead of rose water.

In old-fashioned detective novels, before everything was solved with computers, the hero would kneel over the body and announce that there was an almond smell. The cause of death was clear: poisoning with cyanide. And indeed, bitter almonds contain cyanide, and it is not healthy to consume unprocessed bitter almonds. But they do contain just that acerbic taste that saves good marzipan from dull sweetness. If you make marzipan that will be eaten in large quantities, like the marzipan figurines that are so popular in The Netherlands at the Saint Nicholas Feast, it is best to use almond essence. If you just cover your Christmas cake with a thin layer of marzipan, it won’t hurt to use a bitter almond or two in a pound of sweet almonds. Bitter almonds can be bought easily in Europe, but in the US, they are a banned substance (while weapons are freely available, isn’t that strange?). 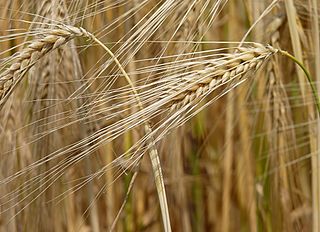 This grain (Hordeum, al kinds of varieties) comes from Asia, but because it is very versatile and low maintenance, it can be grown anywhere. Barley may be the oldest cultivated grain. In the Netherlands it serves mainly as fodder but is also the main ingredient for a popular drink: beer. The grain has ears with long awns.

The polished grains of barley.

Real orgeat, an 18th-century recipe
This almond-barley drink from the 18th century is meant ‘for sick people’. But healthy people can also enjoy this refreshing drink!
© Auteur Christianne Muusers