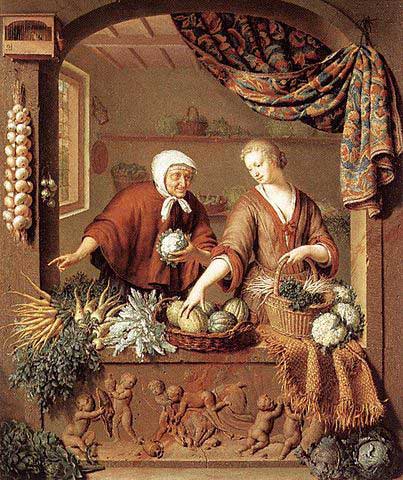 This winter salad for parsnips is taken from a Dutch cookbook from the middle of the sixteenth century. It is a translation from a recipe by the Italian humanist Platina (Bartolomeo Sacchi) in De honeste voluptate (published in 1474, edition Milham, see bibliography).

The Dutch cookbook bears the title Eenen nyeuwen coock boeck (A new cookbook), the author is Gheeraert Vorselman. The first impression dates from 1556, the book was reprinted in 1560 and 1599. The reprint from 1560 is available in a modern edition (edition Cockx-Indestege, see bibliography).

Gheeraert Vorselman was a physician. He was born in the village Zundert, in what is now called Noord-Brabant. He made use of several sources in writing his cookbook. One of these sources is the first part of a convolute which now resides in the Royal Academy for Dutch Language and Literature in Gent (Belgium)  KANTL Gent 15, and Een notabel boecxken van cokerijen, edited by Thomas vander Noot in 1514 (edition Jansen-Sieben and Van der Molen-Willebrands, see bibliography). However, the most important source by far for his ‘new cookbook’ was De honeste voluptate.

Although being a physian, Vorselman left out most of the dietetical information Platina interspersed in his recipes. This recipe for parsnip salad was treated likewise by Vorselman. Platina distinguished two varieties of roots: the white parsnip (Pastinaca alba) which grows best in uncultivated soil, and the red carrot (Cariota rubea), a typical garden vegetable. Parsnip and carrot are hard to digest, according to Platina (De honeste voluptate IV.16, edition Milham p.226/227).

Parsnip is a typical winter vegetable. Before the potato was introduced in Europe this farinaceous root was standard winter fare for many people. Parsnips do not have to be harvested in autumn, they can stay in the ground until needed. The roots are not harmed by the winter frost, they even taste better. You can find and eat fresh parsnips even at the end of winter and early spring. This makes them a typical lenten vegetable.
Parsnip is sweet and starchy. In medieval Europe they were used in sweet dishes by those people who could not afford to buy expensive sugar.

In the recipe below the lettuce is also boiled. According to medieval health theories the eating of unprocessed vegetables was to be avoided. In our time we cherish different views on this subject. I prefer to leave the lettuce as it is (of course you have to wash and clean the lettuce!) and serve the fried parsnips with the uncooked lettuce.
The recipe suggests to remove the hard wooden core of the root. However, if the parsnip is sliced thinly before boiling, this is not necessary. 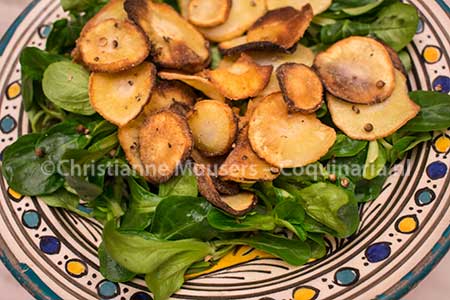 Prepare the parsnips like carrots, and cut into thin slices. Leave the very thin ends for soup. Blanch the parsniop slices one minute in salted water. Drain, let cool, and pat them dry.
Wash and clean the salad greens.

Sprinkle the slices of parsnip with salt and flour and toss rthem so all slices are covered. Heat the oil in a frying pan and fry the slices on both sides to a golden brown. Drain on kitchen paper. It is also possible to deep-fry the slices instead of frying them in a skillet.
Toss the lettuce with vinegar, salt and pepper, and half of the crushed coriander seeds.

Put the lettuce on a large shallow dish. Arrange the fried slices of parsnip on the lettuce. Sprinkle the remaining coriander seeds over the salad.
As an alternative arrange the sallad on individual plates.