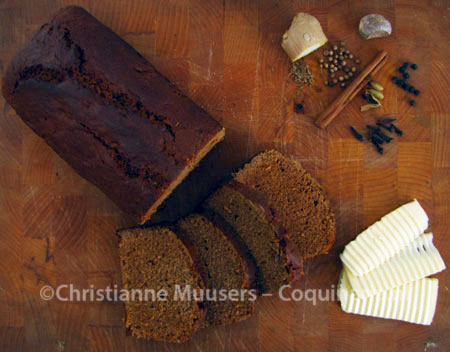 This ‘pepper cake’ is very popular in the Netherlands, and is known under several other names, like ontbijtkoek (breakfast cake) and kruidkoek (spice cake), or connected to regions like Groninger koek or Deventer koek. It is promoted by the food industry as a healthy snack, because it contains no fat. However, sweeteners like honey and sugar constitute more than 50% of the total ingredients. So, whether you find this cake healthy or not depends on where your priorities lie.
This recipe is published because peperkoek is on of the ingredients in a Dutch beef stew, called hachee. Although gingerbread may be used as substitute, I wanted to provide you with the original recipe. Peperkoek has ‘old roots’: the use of rye meal and honey indicate medieval origins. The spices that the cake is named after on the other hand, were only used in the kitchens of the rich in the Late Middle Ages. So, although peperkoek is now a common between-meals snack, it used to be a special and expensive treat!
There are many modern variations on peperkoek, using refined wheat flour, using onmy sugar instead of honey, or adding butter and/or (butter)milk. For this original recipe you’ll need patience. All those spices want to get to know each other before entering the oven! By letting the dough stand for a night the taste will be all the better.
For a gingerbread of 800 gr; preparation in advance 10 minutes, at least 12 hours rest, and again 10 minutes; preparation 60 minutes. 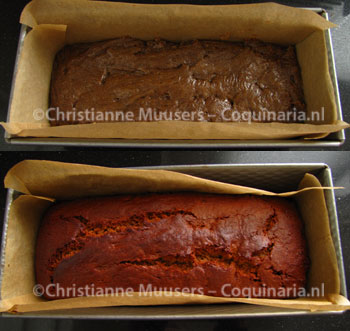 Put in a mixing bowl: rye flour, spices, baking powder, castor sugar and salt.
Put in a sauce pan: sugar, honey and water. Bring to a boil.
Mix dry and liquid ingredients with an electric mixer with dough hooks until you have a firm dough. You can’t use your hands, because the dough initially will be very hot. Continue mixing (or kneading) for several more minutes.
Dress a cake tin with parchment baking paper and fill with the dough. Because that is very firm, start with deposing some dough in the corners of the tin, then add the rest. Smooth the top over with a wet spoon. Cover with cling film and leave to stand for at least twelve hours. You can keep the dough in the refrigerator, but that is not really necessary. 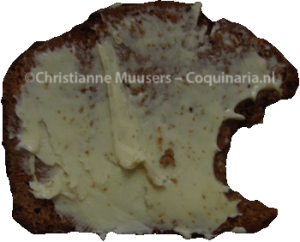 Thickly spread with creamy butter! The crust is crunchy and firm, I love it that way. Spice cake keep for weeks if kept in an airtight box. Taste and structure will even become better with time. When you buy peperkoek in a shop, the crust is always soft. That is because the cake is wrapped tightly immediately after baking, so the moisture can not escape.

I have also taken a glance at German Honigkuchen and American gingerbread. These are often made with wheat flour, but there also recipes using rye. These recipes often appear to have a Dutch or Belgian origin. But these cakes are often glazed, while peperkoek is not.

This grain (Secale cereale) originates in Central Asia, and reached Europe with travelling nomads as a weed in crops of wheat and barley. Rye was not cultivated as a separate crop since about 400 BC, which was much later than the grains it had travelled with. Rye grows on on poor soil and in cold climates, and was planted especially in Northern and Central Europe. Rye is low in gluten, that is why it is often combined with wheat to makea lighter bread. Rye bread is typically leavened with sourdough. Bread baked with wholegrain rye meal is black (or dark grey).
In exceptionally wet seasons rye can be contaminated with a parasitic fungus, Egrot (Claviceps purpurea). This fungus infests the grains and replaces them. It is very poisonous. If contaminated rye is harvested and used, it will cause hallucinations, aborted pregnancies, gangrene and even death. During the Middle Ages there were several outbreaks of ergotism, and it may have been a factor in the witch trials in Salem in 1692. Ergotism is also known as Saint Anthony’s Fire.