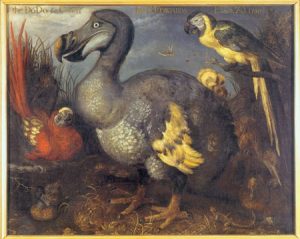 I’ve heard that remark several times in the summer of 2006 during my vacation on Mauritius. It was said with a smile, by friendly people, but still … Yes, I am Dutch, and “we” Dutch people are responsible for the extinction of that peculiar flightless bird by the end of the seventeenth century. So, on behalf of my fellow countrymen of the distant past: Sorry.

The cuisine of Mauritius

To make amends I have now chosen two recipes from Mauritius’ culinary past. They come from a fascinating book I found in Port-Louis, the capital city of the isle. The French book is titled Deux siècles de Cuisine. Héritage de l’Isle de France (That’s what Mauritius was called when it was a French colony). The book is written by Jean-Claude Hein, who received the Grand Prix de Littérature Culinaire de l’Académie Nationale de Cuisine in 2003. He is working on an extended version in English (but in 2012 still not in print).
M. Hein has been kind enough to tell me more about the background of the recipes, and he also send me a short English overview of the culinary history of Maurice. You’ll find his article below.

The two recipes I’ve chosen both originate from the Indian cuisine that started to be an influence on Mauritian cuisine in the beginning of the nineteenth century, with the arrival of Indian immigrants from 1830 onward. The recipes were written down by the grandmother of monsieur Hein, Madame Alice Lesur Rey (1873-1942). She has left several voluminous manuscripts filled with recipes, starting around 1890. In those days it was customary for marriageable girls to write their own cookery notes, to be prepared for their role as the lady of the house.

To be sure, recipes from around 1900 are very recent for this website, but for most of us it already is a distant past. But, because I wanted to present something connected to my summer holiday, and because I wanted to bring the book from which I have taken the recipes to your attention, I present these very young ‘historical recipes’. I promise that the next recipe will be at least five hundred years old!

A short history of Mauritian cuisine, by M. Jean-Claude Hein

Mauritian cuisine is defined as “exotic”, the term usually attributed to the cuisines of tropical climates. It all began in 1720, with the arrival of the French at Isle de France, as they had renamed the Island of Mauritius formerly occupied by the Dutch.
The Dutch, who from 1598 were to intermittently remain on the Island for over one century, introduced there some plants of agricultural interest (coconut, tamarind, various citrus trees, banana, etc.) and successfully cultivated sugarcane and the sweet potato. They also introduced a species of deer from Java, today the Island’s most important game.
They abandoned Mauritius in 1710. 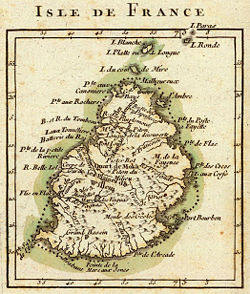 When the first French settlers found themselves in the tropical environment of Isle de France, they were compelled to adapt their cuisine to the local products available, thus creating what was to become the Mauritian Creole cuisine.
As early as 1735, French governor Mahé de la Bourdonnais wanting the Island to be alimentary self-sufficient, to that intent introduced numerous plants of culinary interest from countries as far apart as Europe, India, the West Indies or Brazil, an important and positive step towards the development of the future cuisine of Mauritius.
Pierre Poivre, who during his stay at Isle de France during the second half of the 18th century had for mission to make it the “Spice Island” the French so much wanted, will continue the efforts of de La Bourdonnais by bringing back from each of his expeditions to Southeast Asia a large selection of edible plants, some among which will integrate the local culinary scene.
It is towards the end of the 18th century that Mauritian cuisine began displaying its particular identity, as by that time most of the vegetables and fruits used in present-day cookery were already present at Isle de France, though not all being cultivated.
When the English took possession of Isle de France in 1810, this did not interfere with the local culinary style, but during the 19th century Mauritian cuisine was to benefit from the Indian immigration (as from the 1830s) and also from the less important Chinese one, that peaked towards the end of the century.
As tradition commands, the newcomers having not abandoned their traditional culinary preferences, this was to add still more variety to the Mauritian culinary repertory.
This situation allowed for Mauritian cuisine to adopt dishes as contrasting as the rougail with its typical French Provencal origins or our brèdes, that essential component of Chinese cuisine that blends so well with the numerous local variations of Indian specialities, such as caris (curries) chatinis (chutneys) or achard (atchar).
An exceptional feat in the history of the cuisine of Mauritius is that the three “grandes cuisines” of the world, those of France, India and China were to find themselves on that Island, where not only they rub shoulders, but do associate.
Mauritius is apparently the only country where these three cuisines do constantly appear on the same menu, if not in the same plate, thus positioning it among the exotic cuisines offering the most variety.
And this is one reason why all those having at heart its preservation should endeavour making it better known, especially to those visitors who would enjoy discovering

This concludes the text of Jean-Claude Hein.

This recipe for Vindaye comes from Monsieur Hein’s book Deux siècles de cuisine, p.163 (see bibliography). The recipe  for Moutayes (a deep-fried dessert), is also from this publication.

My adventures in making these dishes can be found on my LJ.
The name of this dish, vindaye, has a history. The Portuguese had a dish called ‘vinha-d’alho’, meat marinated in wine vinegar with herbs and spices, and garlic of course. When the Portuguese colonised Goa (on the West coast of India) the name got corrupted into ‘vindaloo‘, which came to represent one of the spiciest dishes of Indian cuisine. On Mauritius the name got ‘Frenchified’ into ‘vin d’ail’, and ended up as ‘vindaye’ in Creole. This recipe is a vindaye de poisson, but there is also vindaye with meat.

Whatever fish you choose, it has to have firm meat. M. Hein suggests tuna, barracuda, king fish (Caranx sp.) and green jobfish (‘vacoas’ or Aprion virescens). If you have read the original French recipe you’ll have noticed that it calls for ‘safran sec écrasé’. This is not saffron, but dried turmeric. Modern versions of this recipe often add mustard or mustard seeds together with the other spices.
Main dish for 4 persons; Preparation in advance 5 minutes; Preparation 15 to 20 minutes. 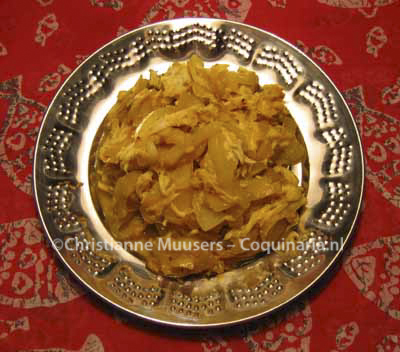 Temper the vinegar with the turmeric.
Remove the seeds fromthe chillies, chop them small. Take care not to rub your eyes or pick your nose, even long after handling the chillies. Or use latex gloves.

Fry the sliced onions in oil until soft, remove them. Add the fish (whole, filets or diced) to the same oil. After a few minutes, add garlic, ginger and chillies, then return the onions to the pan and pour in te vinegar/turmeric. Bring to the boil, poach the fish until done (three to ten minutes, depending on what fish and in what form it is prepared). If you want more sauce, add some water, the vindaye is a rather dry curry.

Vindaye can be served either hot or at room temperature. Curries often taste even better when they are prepared in advance and eaten the day after. This is a dry curry. If it is to be served hot, it is best heated in the micro-wave.

Also known as kunjit or curcuma (Curcuma longa). Just like ginger and galangal it is a rhizome. The Dutch name is ‘geelwortel’ (yellowroot), and that is exactly what turmeric is: very, very yellow, nearly orange. Stains from turmeric are difficult to remove (no wonder, it’s also used as dye). The plant is indigenous to Southeast Asia and India. Turmeric is called ‘safran’ on Maurice. Fresh turmeric is called ‘safran vert’, and what we call saffron is ‘jaffran’ (hindi) or ‘safran oriental’ (creole).